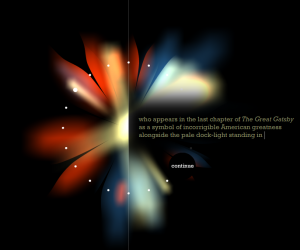 In 2001 I was teaching just outside of Boston with a team of teachers that had come from all over the country to work with inner-city middle school students.  It was then that I was first introduced to Born Magazine.  I found a poem called "Sky" by Christina Manning.  The poem was juxtaposed onto a video and read by the author.  The emotion in her voice, the halting way she read some of the lines, the photographs resonated with me, and inspired me to write several of my own poems.  Born is a fusion of "art and literature, together".

From Born's site: "Born was founded in 1996 in Seattle as an all-volunteer, free publication where writers and designers could collaborate on creative projects. The magazine launched on the Web in 1997 with a focus on editorial design and traditional editorial topics, including essays, film and music reviews, and topical articles. As Web technology continued to evolve, contributing artists began focusing on the connections between literature and visual arts, and experimented with the dynamic relationship between text, cinema, audio, and interactivity. In response, Born redefined its mission in 1998, focusing on collaboration and media-rich interpretations of poetry, short fiction and creative non-fiction, and eventually arrived at its present incarnation."

While students can not, at the present time, submit work to this site, it may inspire them with ideas--new ways of collaborating, or expressing themselves.